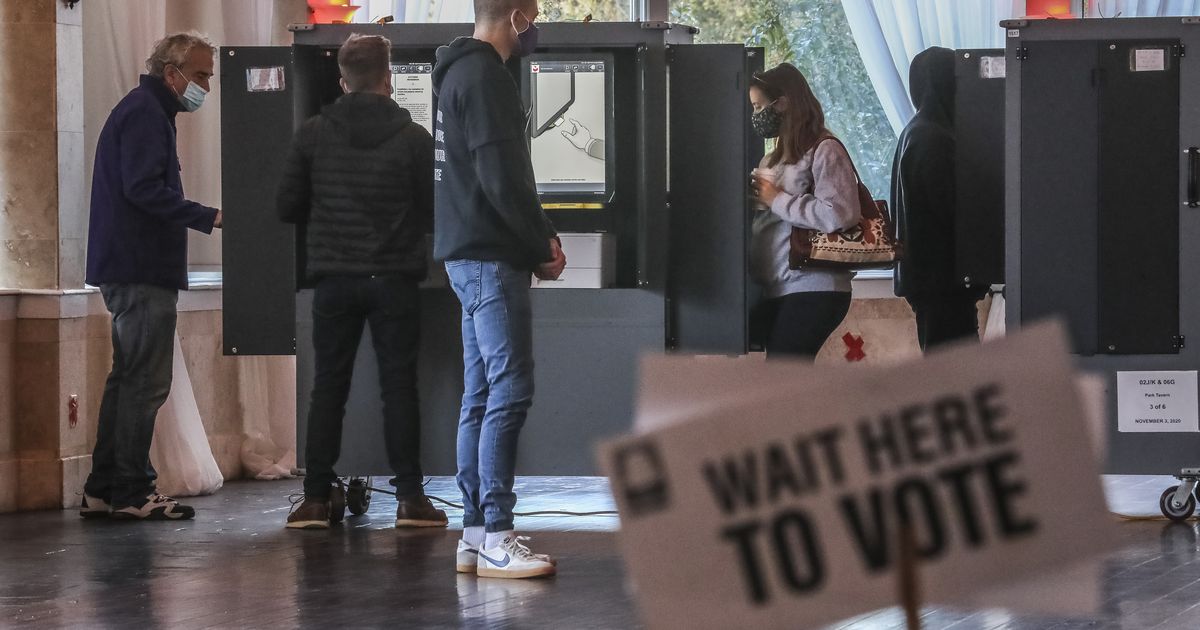 Three liberal justices dissented, writing that the majority’s ruling undermines the landmark law that prohibits discrimination in elections by limiting how it can be applied.

”What is tragic here is that the Court has (yet again) rewritten — in order to weaken — a statute that stands as a monument to America’s greatness, and protects against its basest impulses. What is tragic is that the Court has damaged a statute designed to bring about ‘the end of discrimination in voting,’ ” Justice Elena Kagan wrote in the dissent.

“In Georgia, it’s easy for eligible voters to vote,” Raffensperger said, echoing a theme of the Arizona opinion. “I call on the U.S. Department of Justice to heed this decision and dismiss their wrong, politically motivated lawsuit against Georgia.”

The Justice Department released a statement after the ruling saying it won’t change its approach to challenging state laws it considers discriminatory. But the agency also urged Congress to step in to pass new laws that could resolve some of these challenges.

“The department remains strongly committed to challenging discriminatory election laws and will continue to use every legal tool available to protect all qualified Americans seeking to participate in the electoral process,” the statement said. “The department urges Congress to enact additional legislation to provide more effective protection for every American’s right to vote.”

Georgia State University law professor Anthony Michael Kreis said the ruling will likely make it difficult for the courts to side with groups that have filed challenges to Georgia’s law, which has similar out-of-precinct language among other new provisions regarding absentee, early in-person and election day voting.

“The bar has been raised very high to make it nearly impossible for a plaintiff to bring disparate impact claims” to the courts, Kreis said.

The lawsuit the Justice Department filed last week takes a different approach by focusing on the Republican-led General Assembly’s intent in passing the new state law in Senate Bill 202 as the federal government attempts to prove that the Georgia law was designed to harm non-white voters.

Still, proving the law was passed with a discriminatory intent will be challenging, said Richard Pildes, an election law professor at New York University.

“In discriminatory purpose cases, it’s always been understood to be, in most contexts, a far more difficult hurdle to surmount” than proving that voting laws have discriminatory outcomes, Pildes said. “There’s no question this decision will have very significant consequences on how Voting Rights Act cases are litigated going forward.”

The Justice Department alleges that 29% of Black voters cast an absentee ballot in Georgia’s November election, compared with 24% of white voters, according to the lawsuit.

The disparity in the law’s voter ID requirements are more severe, according to the lawsuit, which cites the same data first reported by The Atlanta Journal-Constitution earlier this month.

Of the more than 272,000 registered voters who don’t have an ID number on file with election officials, 56% of them are Black even though they make up only about 33% of the state’s population, according to the AJC’s analysis of state election records.

ExploreDOJ is the latest to sue over Georgia’s voting law; here are the others

Thursday’s ruling could affect voting laws passed this year not just in Georgia, but also in other Republican-controlled states, said David Becker, executive director for the Center for Election Innovation and Research.

“There are states passing laws where there have been credible allegations that the laws will have disparate impacts on people of color, on minorities who have had difficulty voting in the past, in states like Arizona, Texas, Georgia, Florida,” Becker said. “This is not to say all of these claims are valid or that courts would rule in favor of all these claims, which are certainly credible claims.”

Democrats all the way up to President Joe Biden said Thursday’s decision makes it more crucial for Congress to pass new election protections that blunt the impact of restrictive laws passed in Georgia and other states. Biden said the most recent decision coupled with the 2013 Supreme Court ruling that blunted another key section of the Voting Rights Act damaged a law intended to protect the right to vote.

“The Court’s decision, harmful as it is, does not limit Congress’ ability to repair the damage done today: it puts the burden back on Congress to restore the Voting Rights Act to its intended strength,” Biden’s statement said.

Biden encouraged lawmakers to pass both a wide-ranging election bill, called the For the People Act, and a separate measure that would reinstate federal review when certain states with a history of discriminatory practices change their voting laws.

Among the many provisions in the wide-ranging election bill are new standards for early voting and automatic voter registration, campaign finance transparency rules, limits to partisan gerrymandering and ethics guidelines for federal lawmakers.

It is currently stalled in the U.S. Senate, where Republicans used the filibuster to halt progress on the measure. Thursday’s decision is likely to amplify calls for Senate Democrats to change the rules and lower or remove the 60-vote filibuster threshold.

The second measure backed by Democrats is called the John Lewis Voting Rights Advancement Act, but the legislation has yet to be drafted. It would reinstate federal review of changes to voting laws in states.

Lawmakers are completing a series of hearings on the matter, and the House isn’t expected to have text to consider until after the August recess.

U.S. Rep. Nikema Williams of Atlanta, who also serves as chairwoman of the Democratic Party of Georgia, said she will continue championing congressional action on voting rights.

“Our goal in this country should always be to make voting more accessible to everyone that wants to cast a ballot,” she said.

The Associated Press contributed to this article.

A legal expert said the U.S. Supreme Court’s ruling in the Arizona case will likely make it difficult for courts to side with groups that have filed court challenges to Georgia’s new election law, Senate Bill 202. The eight suits filed so far have all been assigned to U.S. District Judge J.P. Boulee, who held a hearing on one of them Thursday. It could take years for the cases to work their way through the federal court system.