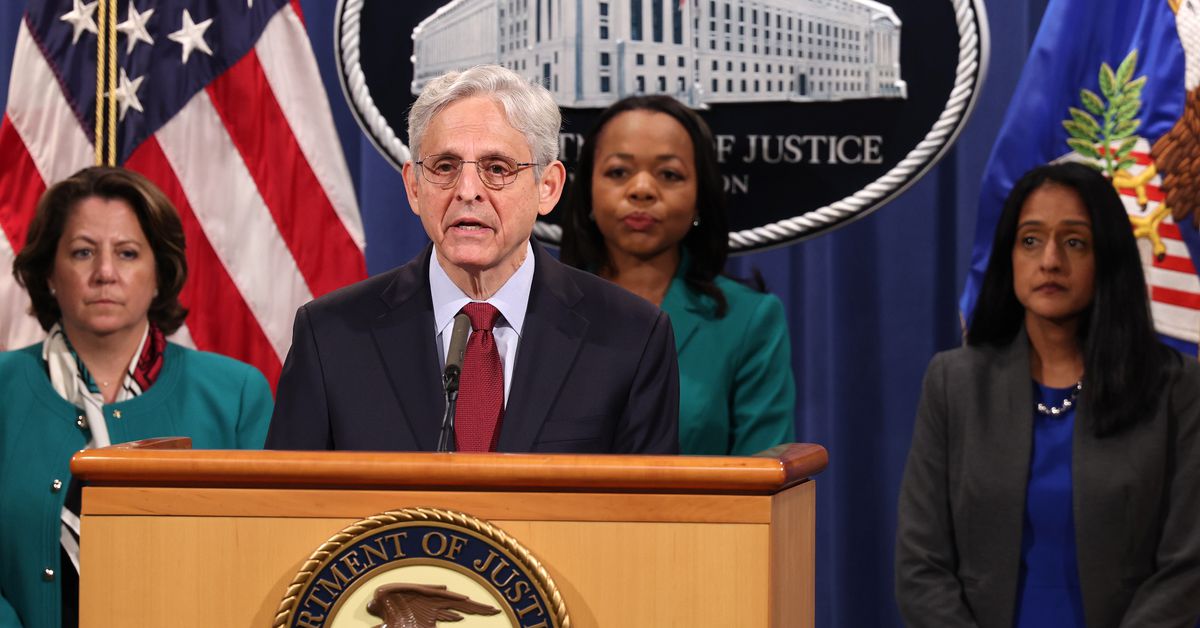 Yet it is far from clear whether the strength of their case will matter: They will have to litigate this case before a judiciary that is increasingly hostile toward voting rights claims.

The complaint in United States v. Georgia, which is signed by the most senior lawyers in the DOJ’s Civil Rights Division, alleges that several provisions of the Georgia law “were adopted with the purpose of denying or abridging Black citizens’ equal access to the political process, in violation” of the Voting Rights Act.

The DOJ does not attack the entire Georgia law, and it does not directly attack the single most troubling provision of the law, which allows Republican officials to effectively take over local election boards that have the power to close polling places and disqualify voters.

Instead, the lawsuit focuses on several provisions making it harder to cast an absentee ballot in Georgia. It also targets provisions that disenfranchise many voters who cast a ballot in the wrong precinct, as well as the Georgia law’s provision prohibiting pro-democracy groups from distributing food and water to voters waiting in long lines to cast a ballot.

While the lawsuit only argues that these parts of the law violate the Voting Rights Act, it also asks the courts to invoke a rarely used provision of the Act which would place Georgia elections under federal supervision.

Before the Supreme Court’s decision in Shelby County v. Holder (2013), states with a history of racist voting practices, including Georgia, had to “preclear” any new election rules with officials in Washington, DC. Shelby County effectively deactivated this preclearance regime, but a provision of the Voting Rights Act still allows preclearance to be imposed on states that commit particularly egregious discrimination against voters of color.

And if preclearance were reimposed on Georgia, that would likely prevent GOP-controlled election boards from implementing policies intended to disenfranchise Black voters.

In another era, the Georgia lawsuit would have had a very good shot of prevailing. In Village of Arlington Heights v. Metropolitan Housing Development Corp. (1977), the Supreme Court laid out several factors which plaintiffs alleging race discrimination may point to in order to prove their case, including evidence that lawmakers departed from “the normal procedural sequence” that they ordinarily use to enact laws, the fact that a state has a history of racist practices, or the fact that a law’s impact “bears more heavily on one race than another.”

The DOJ’s complaint does an effective job of showing that many of these factors are present in Georgia. Yet while it has strong legal arguments on its side, the courts are now much more conservative than the Supreme Court that decided Arlington Heights — indeed, the current Supreme Court is even more conservative than the one that decided Shelby County.

The Georgia case, moreover, is assigned to Judge J.P. Boulee, a Trump judge.

The Justice Department, in other words, won’t simply need to prove its case, it will also need to overcome a judiciary stacked with judges who tend to be hostile to voting rights claims — and that are particularly hostile to claims that white lawmakers engaged in intentional race discrimination.

That will not be easy.

The DOJ’s complaint lays out a fairly straightforward narrative against the new Georgia law.

Georgia, of course, has a well-documented history of racist practices. Yet, despite that history, Georgia voters elected the state’s first Black senator, Raphael Warnock, in the most recent election cycle. And the state also voted to elect Vice President Kamala Harris, the first African American elected to that office, when it went for President Joe Biden in 2020.

Part of the reason why this historically white supremacist state voted this way — and why the once solidly Republican state now has two Democratic senators — is an influx of Black residents. “The number of Black residents increased 70.7 percent from 1990 to 2010 according to decennial Census counts,” the DOJ explains in its complaint, “and Black residents’ share of Georgia’s total population increased from 26.8 percent of the population in 1990 to 30.6 percent in 2010.”

These Black Georgians were especially likely to use absentee ballots in the 2020 election cycle — so the law’s provisions limiting absentee balloting will have a disproportionate impact on African Americans if this pattern continues into future elections. (Although most of the spike in absentee voting in 2020 can be attributed to the pandemic, Black activists in Georgia have a history of using absentee voting drives to increase turnout.)

Black Georgians have also been much more likely to face long lines when they vote in person, according to the DOJ, which is why a law preventing good Samaritans from providing food and water to people waiting to cast a ballot is likely to have an outsized impact on African Americans.

The state legislature, the DOJ alleges, enacted the new law “with knowledge of the disproportionate effect that these provisions … would have on Black voters’ ability to participate in the political process on an equal basis with white voters.” The law passed without any support from Black lawmakers, and the legislature used an unusually rushed process to pass the bill.

Among other things, the GOP-controlled legislature bypassed the legislative committee that ordinarily would have overseen such a bill, and assigned it instead to a special committee chaired by a lawmaker who’d previously compared the “always-suspect absentee balloting process” to the “shady part of town down near the docks you do not want to wander into because the chance of being shanghaied is significant.”

The legislature also bypassed a process typically requiring such a bill to receive a “fiscal note,” a document laying out the bill’s likely impact on state and county spending.

Taken together, this and other evidence suggests that Georgia’s largely white Republican Party saw their grip on the state slipping away. The state’s Black population was growing, in numbers and in political power, and it just managed to elect a Black senator for the first time in the state’s history.

Faced with this impending loss of power, the DOJ alleges, white state lawmakers intentionally enacted legal provisions that they knew would diminish Black turnout — all in an effort to prevent African Americans from exercising the kind of political power they wielded in 2020.

Why this case faces an uphill climb

Even setting aside the fact that this case will be heard by a Trump-appointed trial judge, and then potentially by a federal appeals court and a Supreme Court dominated by Republican appointees, the DOJ will also have to overcome a raft of recent precedents undermining the Voting Rights Act.

The most harmful of these cases to the DOJ’s chances of prevailing is Abbott v. Perez (2018), a 5-4 Supreme Court decision handed down along party lines.

Perez held that lawmakers accused of acting with racist intent enjoy such a high presumption of racial innocence that few litigants will be able to overcome it. As Justice Samuel Alito wrote for his Court in Perez, “whenever a challenger claims that a state law was enacted with discriminatory intent, the burden of proof lies with the challenger, not the State.”

And Alito also went much further than simply placing the burden of proof on voting rights plaintiffs. The facts of Perez were simply extraordinary, and they suggest that few plaintiffs alleging race discrimination can ever prove their case.

In 2011, Texas enacted congressional maps that a federal court later struck down as an illegal racial gerrymander. In 2012, however, this litigation was still making its way through two separate trial courts, and the state did not have any lawful map that it could use to conduct its congressional elections that year.

Thus, to ensure that Texas could actually hold congressional elections in 2012, a federal judge drew interim maps that incorporated many of the districts that were later struck down. In drawing this temporary map, however, the judge emphasized that “this interim map is not a final ruling on the merits of any claims” that some parts of the map were illegal racial gerrymanders.

Then, in 2013, Texas’s Republican legislature took this interim map and adopted it as its own — effectively attempting to make the temporary map into a permanent map, despite the fact that it included several racially gerrymandered districts. And the Supreme Court upheld this 2013 law in Perez.

The 2013 map, Alito claimed, was “legitimate” because it wasn’t enacted with racist intent. Rather, he argued, it was enacted because Texas “wanted to bring the litigation about the State’s districting plans to an end as expeditiously as possible.”

The upshot of Perez is that the DOJ will now have to argue that the evidence that Georgia’s voter suppression law was enacted with racist intent is even more potent than the unusually compelling evidence of racist intent that was present in the Perez case. The DOJ will have to make that case before a Trump-appointed trial judge. And it may ultimately have to argue its case before a Supreme Court that is even more conservative than the one that decided Perez.

And then, if the Justice Department hopes to stop Georgia Republicans from taking over local election boards and using them to disenfranchise voters, it will have to convince the courts to impose a rarely imposed sanction on Georgia and restore preclearance in that state.

Perhaps the Justice Department can overcome all of these challenges. But the deck is heavily stacked against them, no matter how strong their case may be.