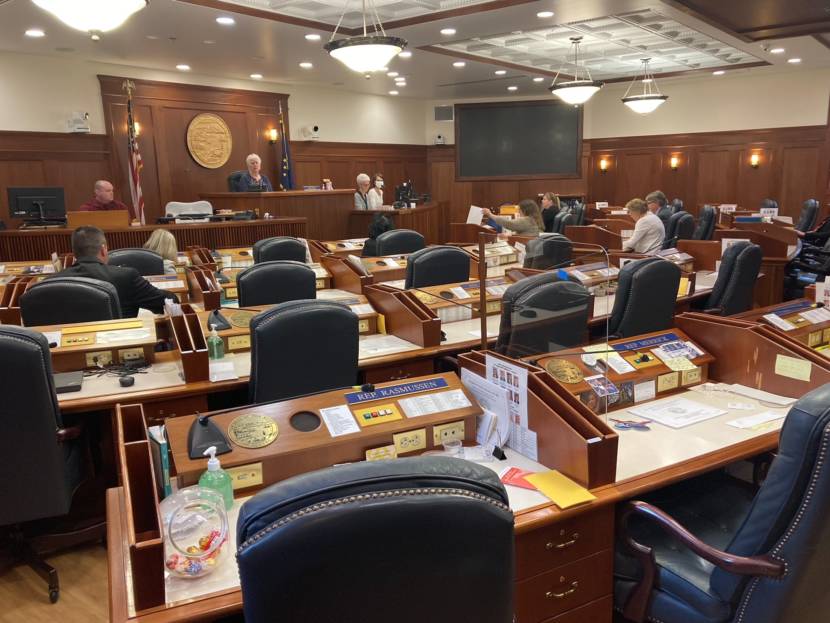 The Alaska Legislature’s special session ended on Friday without an agreement to avoid a state government shutdown on July 1.

Lawmakers will get back to work this week to, again, try to reach a deal.

The new special session starts Wednesday. Gov. Mike Dunleavy issued the call for the second special session on Friday, shortly after the House held a brief technical floor session to end the first one, which lasted 30 days.

Dunleavy and the Department of Law cite a section of the state constitution as the reason for the shutdown. That section requires that bills go into effect 90 days after they become law, unless two-thirds of both legislative bodies approve a different day. While the Senate had enough votes to approve July 1 as the day when the budget would go into effect, the House didn’t.

“The budget passed this week is constitutionally impaired if the goal was for it to take effect on July 1,” said Dunleavy.

[Want Alaska Public Media’s top stories delivered to your inbox? Sign up for our daily newsletter.]

House majority leaders said on Friday that the layoff notices and potential shutdown were Dunleavy’s choice. They point to a history of Alaska governors spending money based on bills that lacked the same effective-date provision as this year’s budget bill. And they did it based on advice they received from state lawyers. They argue Dunleavy could draw from available funds to cover state spending during the time period before the legal effective date.

“His choice to send out pink slips is a very sad day for Alaskans,” said House Speaker Louise Stutes of Dunleavy. “To put them on shaky ground needlessly is very distressing.”

Stutes is a Kodiak Republican who leads a caucus with 15 Democrats, four independents and one other Republican.

House majority leaders said Dunleavy should ask members of the House minority to vote for the effective date.

“Nobody should be strong-arming the other side,” he said. “They’ve got to sit down and work together and craft something that’s going to work, in which they want to bring people together, as opposed to twist arms and force them to vote. And that’s what happened the other day. That arm-twisting didn’t work. This is the result.”

With a shutdown on the horizon, legislators who voted to block the budget from going into effect on time recently gave the first public outline of what they want to avoid the shutdown.

Members of the Republican House minority caucus said they want agreement on the components of a long-term plan for the state budget.

Rep. Cathy Tilton, R-Wasilla, did not say how detailed the agreement on the components must be. But she did say it extends beyond passing the budget.

“The budget is a part of that conversation,” she said. “It’s an integral part. But it’s not the only component of this long-term fiscal stability that we’re looking to get to.”

Other Republicans who voted against a July 1 start to the budget emphasized specific issues.

Anchorage Rep. James Kaufman said he wants the Legislature to agree on what the sequence of policy changes will be, including which changes must happen at the same time.

“For me, what this would look like would be the framework — the master framework — of what we’re doing, what components have already been put in place, and then what possible pieces need to be in place that are not yet there,” he said.

North Pole Republican Rep. Mike Prax emphasized that the Permanent Fund dividends should be drawn from Permanent Fund earnings, and not other sources of funding, like most of the dividend money was in the budget bill.

Like in other years, lawmakers remain divided over the size of dividend checks.

In May, Dunleavy proposed making dividends half of the annual draw from the Permanent Fund as part of a constitutional amendment to move the fund’s earnings into the constitutionally protected principal. This year’s dividend under the formula change would be roughly $2,350, rather than the roughly $3,500 under a formula in state law that hasn’t been followed the past five years.

But lawmakers who worked on the budget are concerned that dividends of that size will draw down the earnings reserve account and threaten the Permanent Fund’s future.

Eagle River Rep. Kelly Merrick is, along with Stutes, one of the two Republicans in the House majority. She noted that Dunleavy’s administration wants the Legislature to adopt the $2,350 dividend formula before any other major changes.

“They are hoping to have that conversation about revenue and cuts later,” she said. “And I feel like it needs to be done at the same time, because you can’t pay out a big PFD now and decide how to pay for it later.”

Nonpartisan legislative analysts estimate the governor’s PFD proposal would lead to an average deficit of $1 billion per year for the next nine years under current state policies. Dunleavy’s administration hasn’t proposed policy changes on the scale necessary to close the gap.

The nonpartisan analysts estimate that without new revenue or spending cuts, the state budget would be balanced in the long term with dividends of roughly $500 to $600.

Rep. Bryce Edgmon, I-Dillingham, a member of the House majority caucus, said the state may be able to pay dividends in the range of the $1,100 included in the original version of this year’s budget without instituting a broad-based tax.

“We have the ability — if we do it right — to maintain essential services to the degree that Alaskans depend on them; have a sustainable permanent fund dividend at around the historical average of the dividend since it began in 1982; and have an environment where we continue to have low taxes in Alaska,” he said.

The failure of the effective date vote on the budget isn’t the only outstanding budget issue. Both chambers failed to pass a provision to draw funds from the Constitutional Budget Reserve.

Every year, that vote is used to re-stock dozens of funds, including the $1 billion Power Cost Equalization Fund, which lowers the cost of electricity in rural and other high-cost areas.

To restore these funds would require an even higher vote threshold then to pass the effective date clause — three quarters of both legislative chambers.

The next special session is scheduled to begin at 10 a.m. on Wednesday in the Capitol.