Government’s three waters advertisements ‘slap in the face’ for councils 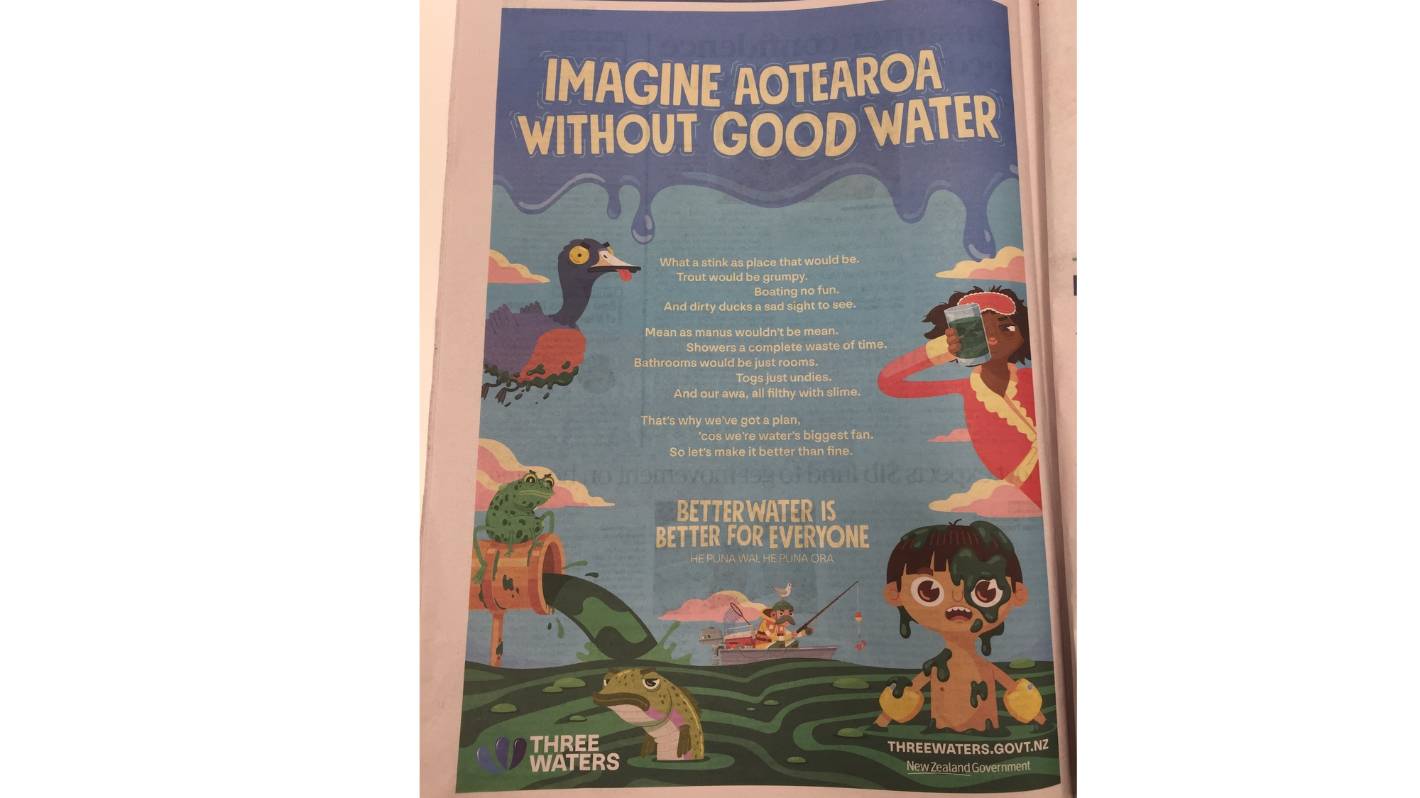 A photograph of a newspaper advertisement about the Government’s three waters reform programme that was published in the Nelson Mail on Wednesday.

Government advertisements about its three waters reform programme have been slammed as “deeply disappointing”, overly negative, unsophisticated and a “slap in the face” for local government.

The ads show cartoon-style versions of people and animals in and around green-coloured water of poor quality.

A trio of cartoon people are fishing, swimming and holding a glass of water. All look unhappy as do a cartoon fish, frog and duck. Readers are asked to “imagine Aotearoa without good water”. A tag line says: “Better Water is Better for Everyone.”

A spokesperson for the three waters reform programme at the Department of Internal Affairs (DIA) said the Better Water is Better for Everyone advertisements were running as part of a phased ongoing Government public awareness and information campaign across “TV, online, social media, out of home and print”.

Tasman District Council engineering services manager Richard Kirby told a meeting of the council’s operations committee the message conveyed by the ads was that “we’re in a really bad state with our three waters”, which refers to drinking water, storm water and wastewater.

The advertisement was published the day before a council report was received showing that 99.4 per cent of dry-weather​ water samples taken last summer from popular monitored swimming spots in the district complied with the guidelines.

“I just find it ironic on the day after they put that ad out, we report on the condition of our water in the district, and it doesn’t bear any resemblance to the pictures on that advert,” Kirby said. “I understand … there’s disquiet right round the country. It’s like a slap in the face for local government.”

Councillor Kit Maling described the ad as “very unfair” when some councils had spent a “huge amount of money” on water.

Maling pointed out the ad comes after Crown agency Waka Kotahi informed the council it would likely provide less funding than expected for the planned local road maintenance programme.

“They criticise us in one and say we need to do this better, and then they take it away on the other,” Maling said. “So it’s just an indictment on central Government.”

Councillor David Ogilvie said he was surprised by the ad, which was a “very strong generalisation across the whole of New Zealand”.

Some councils might have a problem but “to make a very general statement is very unfair to councils like ourselves … that are keeping up the pace”.

“It’s just disappointing in terms of relationships … and annoying at a time when we should be moving forward together, focused on the issues,” Ogilvie said.

Councillor Celia Butler said she believed it could be the start of “the undermining of local government as all these national initiatives come on in”.

“I think we should expect more of it and respond to it,” Butler said.

A senior spokesperson for Local Government New Zealand said the organisation was aware of the advertising campaign and “deeply disappointed with the overly negative and unsophisticated way in which is it trying to address the serious matter of water reform”.

“We voiced these concerns before the campaign started, and we’ve done so recently with the Department of Internal Affairs and the Government,” the spokesperson said.

“We don’t want these ads to distract from the work of reforming our three waters system. The complete absence of a robust regulatory system for at least 30 years means we’ve got a big task ahead of us, and the debate on how to do it is not helped by talk of ‘dirty ducks’ and ‘grumpy trout’.”

The spokesperson for the three waters reform programme at DIA said the campaign shouldn’t be interpreted in any way as a reflection on those working to provide New Zealanders with safe drinking water, wastewater and stormwater services “in an environment where funding and other resources are often constrained”.

“Their knowledge, skills and experience will be required more than ever in years to come,” the spokesperson said. “The Government is determined to continue working collaboratively with the local government sector on the reform programme.”

The department acknowledged the quality of water services varied around the country.

“But detailed research shows that without change to the way services are delivered, communities will either face unaffordable bills or water quality, infrastructure and services will decline over the next few decades.”

An advisory group, including members of the local government sector, were involved in the creation of the campaign. That campaign aimed to build awareness of the need for three waters reform and “assist New Zealanders to participate in the process of supporting the best water services decisions for New Zealand and for their communities”, the spokesperson said.