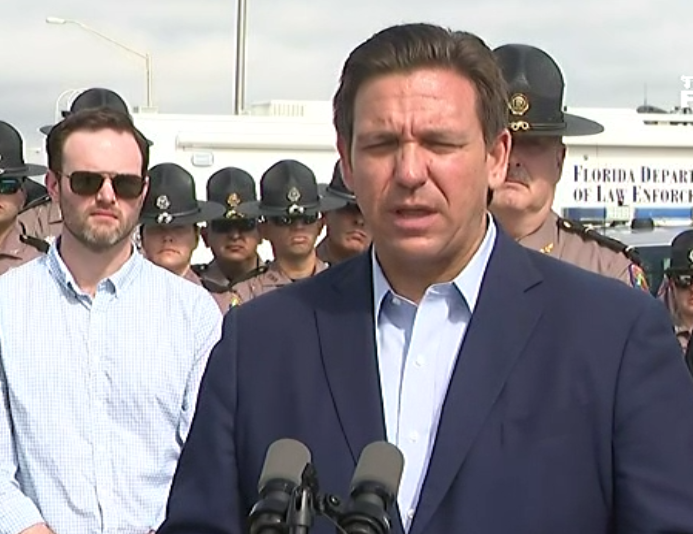 Gov. Ron DeSantis traveled to Pensacola Friday to dispatch 50 state law enforcement agents to the Texas-Mexico border, a mission highlighting what Republicans like the governor consider security failings by the Biden administration.

DeSantis didn’t mention the president by name during a press conference, conducted at a highway weigh station with the uniformed officers in attendance, although in the past he has criticized President Biden for reversing the Trump administration’s border policies.

Although those were punitive toward asylum seekers including children, the governor had insisted they had been “curbing illegal immigration, securing our border, and keeping Americans safe.”

DeSantis, who has been using culture war battles to boost his national profile ahead of his reelection bid next year and a possible run for president, indicated that at least part of the tab for this exercise will fall on taxpayers in Texas, not Florida.

“That’s still a point of discussion. Typically, if someone would help us, you know, we would pick up some of their funding. So, that’s how we would hope that it goes. But we don’t anticipate getting any federal funds,” he said.

In addition, the GOP governors of Idaho and Nebraska are sending resources, according to U.S. News and World Report,  and Republican Iowa Gov. Kim Reynolds said Thursday that she would send 50 state troopers.

The Phoenix contacted the White House seeking comment but was referred to the Department of Homeland Security, which includes U.S. Customs and Border Protection, or CBP.

“CBP continues to leverage our longstanding relationships with state and local law enforcement, including deconflicting operations in the border region and responding to call-outs from other law enforcement agencies. CBP defers to the governor’s office to speak to any steps they are taking to increase an enforcement posture,” that agency said via a spokesman.

Progressive organizations denounced the as politically motivated in written statements.

“It is more clear by the day that Gov. Ron DeSantis is putting his political ambitions to run for president in 2024 ahead of the everyday needs of Floridians. Today’s photo-op to send Florida law enforcement officers to the Southern border, as our state faces a rising wave of violent crime after two decades of Republican rule, is just the latest example of Gov. DeSantis’ utter neglect for his actual job of governing,” Progress Florida Executive Director Mark Ferrulo said.

“As Floridians continue to navigate a fragile recovery from an unprecedented global pandemic, Gov. Ron DeSantis continues to fight imaginary problems aimed at appealing to a national conservative base. These days, the only place the people of Florida can find Gov. DeSantis when he’s not raising their taxes is on Fox News,” said Florida Watch Executive Director Josh Weierbach.

Vice President Kamala Harris was in the border region on Friday, visiting a migrant processing center, according to news reports, having already traveled to Mexico and Guatemala to address the roots of the problem.

“The vice president was named border czar over 90 days ago, and in that time Texans have had their homes broken into, property damaged, and guns pointed at their heads as cartels, smugglers, and human traffickers profit off the Biden administration’s reckless open-border policies.”

Abbott and the GOP Arizona Gov. Doug Ducey had requested the assistance but, as of Friday, only Texas had requested specific resources, DeSantis press secretary Christina Pushaw told the Phoenix via email. “But we stand ready to assist Arizona as well if need be.”

“As with all EMAC requests, our agencies will encumber costs and seek reimbursement. We anticipate that this issue will be addressed during the upcoming special legislative session in Texas.”

Senate Democrats had urged DeSantis to change his mind about the deployment in light of rising gun crime, arguing it would “divert Florida officers away from their local communities where they are desperately needed will handicap efforts to combat this critical and urgent public safety issue.”

The target, the governor said, is criminal cartels engaged in cross-border drug- and human trafficking that causes problems throughout the country, including Florida, where rural sheriffs have complained about an influx of methamphetamine.

“The governors of Texas and Arizona sent requests to other states. Florida answered that call. We stepped up, partially because a lot of these states have stepped up to help us in emergency situations in the past. When we’ve had hurricane response and recovery operations, they didn’t even hesitate any time we’ve needed help,” DeSantis said.

“They will be ready to go [to work] on Monday of this coming week,” DeSantis said.

“Hopefully, I’ll be able to get out there at some point and wish them well when they’re on the ground but, at a minimum, I wanted to come here and say to you guys going out, thank you for what you’re doing, the people of Florida support what you’re doing.”

In announcing the planned deployment on June 16, the governor indicated that local law agencies would be involved as well, but they’re not going just now. “We were able to meet the need with the state resources, to start,” he said.

“This is kind of the first tranche, and so it’s state [officers] at this point, but we’ve got a lot of folks in the queue. And there’s different ways locals can support. If these guys are going out and there’s ever a need to back-fill what they’re doing in Florida, then the locals can send and back-fill that while they’re doing the border.

Note: This story has been updated to include comments from Progress Florida and Florida Watch and U.S. Customs and Border Protection.