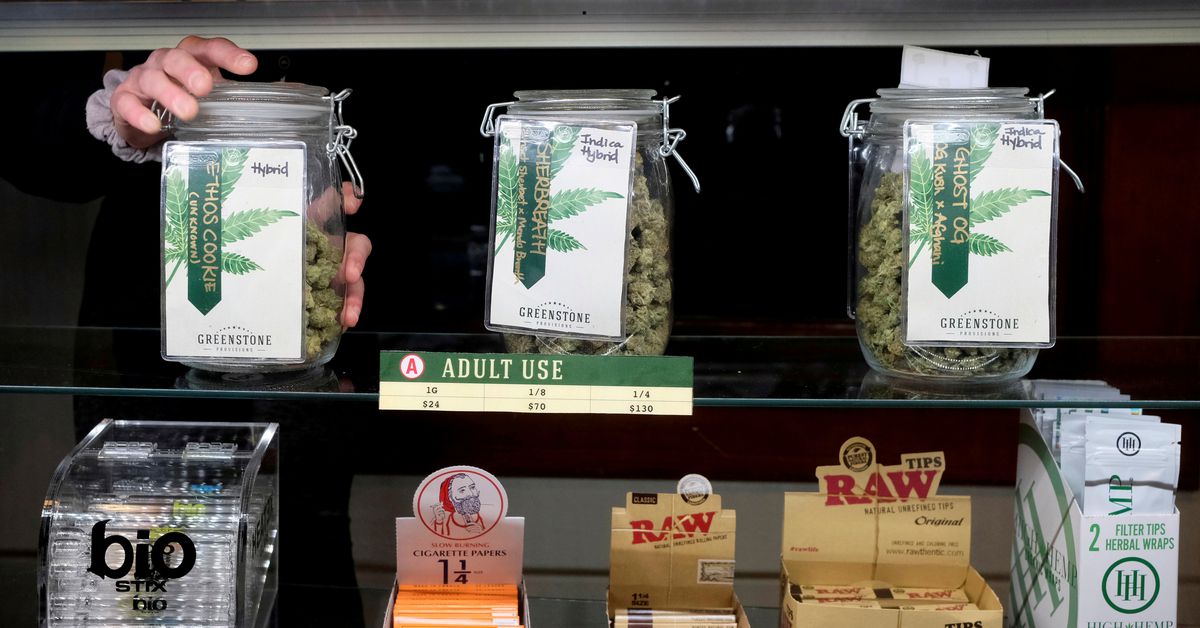 An employee holds a jar of marijuana on sale at the Greenstone Provisions in Ann Arbor, Michigan. REUTERS/Matthew Hatcher

June 16, 2021 – Cannabis legalization was one of the big winners of the 2020-2021 legislative cycle, with major states like New York and New Jersey significantly expanding their medical cannabis programs, while at the same time creating an entirely new adult-use cannabis industry in the heart of the East Coast. These moves have already had the expected domino effect of putting pressure on other states up and down the coast, with Virginia moving up its timeline for legalization to July 1, 2021, and Pennsylvania’s governor renewing his commitment to sign a bill expanding his state’s program if it reaches his desk.

Proponents of this most recent push are a coalition of social equity advocates seeking to rebuild communities devastated by the war on drugs, individuals who believe that existing drug laws unnecessarily restrict their freedoms, and those who see the enormous financial potential of the cannabis industry. The last category includes both businesses seeking to turn a profit, and cash-strapped state and local governments that will most directly benefit from taxing cannabis at various stages of the supply chain.

However, while medical cannabis is legal in some form in 36 states, and adult-use cannabis has been legalized in 17 states and the District of Columbia, classification of cannabis as a Schedule I drug by the federal government still creates significant legal and business risks for industry participants. While we will cover some of these risks in greater length in subsequent articles, we will outline a few of them here.

Cannabis (other than hemp) is a Schedule I drug under the federal Controlled Substances Act (CSA). This means that, notwithstanding the existence of medical cannabis laws in the majority of states, the federal government’s stance is that cannabis has no currently accepted medical use, and it may not be sold or prescribed. Periodically, there have been efforts at the congressional level to provide protections to ancillary industries servicing the cannabis sector, with protections for the banking industry (in the form of the SAFE Banking Act of 2021, H.R. 1996) coming the furthest. But as of the date of this article, none of them have crossed the finish line.

Because of the supremacy clause of the U.S. Constitution, state laws cannot override federal prohibition. United States v. McIntosh (9th Cir. 2016). Nevertheless, some courts have found that (at least with respect to medical cannabis) federal law does not completely preempt state law, and the two may coexist side by side. See, e.g., Hager v. M&K Constr.(N.J. Apr. 13, 2021). This is rooted in Congress’ direction to the U.S. Department of Justice not to use any resources to prosecute state-compliant medical cannabis businesses. This appropriations rider is commonly known as the “Rohrabacher Amendment,” and has been authorized annually since 2014.

At around the same time the Justice Department issued non-binding enforcement priorities guidance to its attorneys, known as the “Cole Memorandum.” The memorandum advised department attorneys not to use their “limited resources” to prosecute medical and adult-use cannabis operators complying with relevant state laws and the additional priorities outlined in the memorandum (including not diverting cannabis across state lines).

The Cole Memorandum did not survive the Trump administration and was rescinded by U.S. Attorney General Jeff Sessions. In practice, it appears to have remained in force, both because department attorneys still retained their discretion, and because it remained incorporated into bank guidance provided by the Financial Crimes Enforcement Network (FinCEN), which is the financial crimes arm of the U.S. Department of the Treasury.

Operators who are not licensed under state law (sometimes known as “illicit” cannabis operators) are fully exposed to prosecution under those laws, as well as applicable state laws which often mirror the CSA. However, it is important to note that even those operating in accordance with state law are violating federal statutes; it is simply that those statutes are not currently being enforced (either through prosecutorial discretion, or at congressional direction).

Concerns about a possible change in policy came to a head last year when a federal grand jury subpoena issued to Ghost Management Group, the operator of “Weedmaps” — which for a time listed both state legal and illicit cannabis dispensaries in California — became public. The subpoena is broad, and industry participants are still waiting to see what the ultimate outcome of the investigation will be. This, coupled with the conviction of two businessmen for bank fraud for helping a company called Eaze dupe banks and credit card companies into processing cannabis related transactions earlier this year, is a reminder that federal enforcement may not be as “hands off” as industry insiders would like to believe.

Participation in the industry is particularly risky for non-citizens, whose involvement may result in a permanent immigration ban.

Despite some predictions that the state-legal cannabis industry will grow to $80 billion by 2030, the cannabis industry is faced with headwinds and business risks that only increase the closer one gets to the plant.

Plant touching businesses, which include cultivators, distributors, and retailers, of medical cannabis, must obtain licenses from the state in which they operate. Application fees range from a few hundred dollars to tens of thousands of dollars depending on the state and type of license. Successful applicants, who must complete what is an often capital-intensive and detailed application process, can expect to pay license fees in the mid-five to six figures. In major markets, the process is very competitive and unsuccessful applicants often cannot recoup the application fee, let alone the money invested in preparing the documents and consulting with advisors.

Some licenses require an executed lease or ownership of real estate in a properly zoned location at the application phase. Because many outside investors will usually wait until an application is secured, this makes it difficult for anyone but the very capitalized to compete. States promoting social equity programs are still trying to figure out how to make the process work for those applications.

Even those who are successful must navigate unique handicaps. This includes constrained access to banking, no access to legitimate credit card processing, the costs of implementing seed-to-sale tracking, and the inability to employ traditional economies of scale since each state must be siloed to prevent even a hint of diversion of cannabis across state lines. In addition, federal illegality makes it impossible to deduct many expenses under Section 280E of the revenue code, and federal rights (like trademark and bankruptcy protection) are unavailable. These legitimate operators must compete with an illicit market that is not concerned with such compliance and is sometimes poorly policed, while still trying to turn a profit.

Nevertheless, the industry continues its impressive growth, and new legal issues and business challenges continue to spring up as it evolves.

Opinions expressed are those of the author. They do not reflect the views of Reuters News, which, under the Trust Principles, is committed to integrity, independence, and freedom from bias. Westlaw Today is owned by Thomson Reuters.

Alex Malyshev is a partner at Carter Ledyard & Milburn LLP, and the chair of its Cannabis, Hemp & CBD Industry Group. He contributed the chapter, “Banking and Investment Considerations for Cannabis Businesses” in “Health Care and the Business of Cannabis: Legal Questions and Answers,” (American Health Law Association 2021). He can be reached at [email protected]

Sarah Ganley is an associate in the Litigation Department of the firm and can be reached at [email protected] Both authors are based in New York.