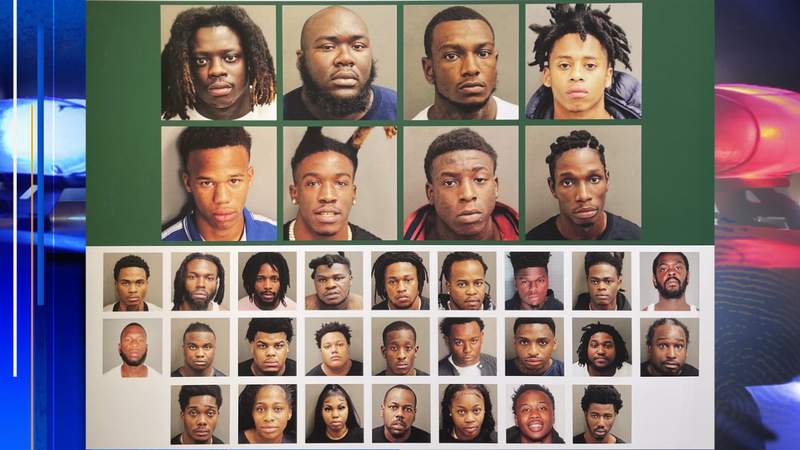 Mina said the investigation, called Operation X-Force, began in October as a feud between rival gangs — Army and 438 — was escalating.

“The ongoing feud that has been going back and forth between these gangs has been responsible for over 30 shootings and several homicides in a number of our jurisdictions,” Mina said.

Investigators highlighted the deaths of four people who were killed as they were caught in the crossfire of retaliatory shootings, including Tavyiah King — the 16-year-old niece of Orlando City Commissioner Regina Hill.

According to Velez, Woods faces a charge of first-degree murder and investigators believe it was his gun that killed King. Two teens were already arrested and facing charges for King’s shooting death — Anthony “Ant” Barnes, 17, and Jacarious Jermaine Jevonte Simpson, 18.

Throughout the course of the investigation, 15 guns were pulled off the street, which included two stolen guns and two that were directly involved in King’s death, according to Stucker. Investigators said they also recovered 13 auto sears — which are devices that can convert a semi-automatic gun to fully automatic — inside the home of Jacquavius Smith, who also goes by the name GlokkNine.

Stucker said in all, 34 people have been arrested over the course of the investigation and of those 32 are facing racketeering charges.

“This case with these 34 defendants is being prosecuted by the office of statewide prosecution,” Stucker said.

Attorney General Ashley Moody released a statement about these arrests. It reads:

“This coordinated, multiagency takedown of some of the most violent gang members in Central Florida was the result of months of hard work, skillful law enforcement investigative efforts and legal assistance by my Statewide Prosecutors. We will not let violent criminals involved in a gang war run roughshod through our communities — threatening the lives and safety of our citizens. As Attorney General, I will continue to stand with our brave law enforcement officers as they fight to keep Floridians safe. With these criminals now in custody, my Statewide Prosecutors will use every tool at their disposal to ensure justice is served.”

See the full list of suspects, including those still wanted by investigators, below: